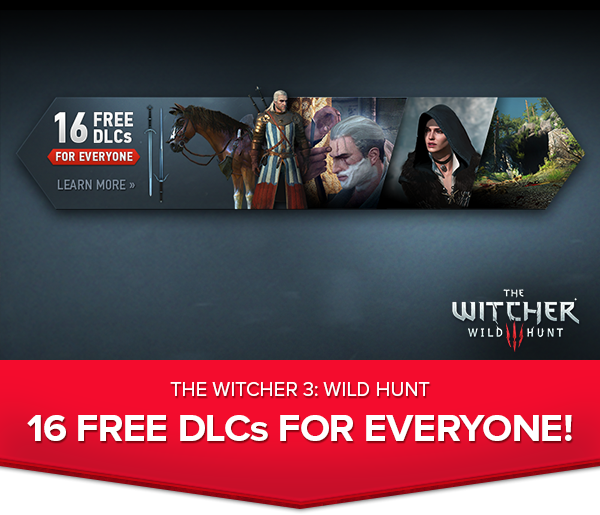 CD PROJEKT RED, creators of The Witcher 3: Wild Hunt, the next-generation, open world fantasy RPG hitting stores February 24th, 2015, is excited to unveil their FREE DLC program for the game.The FREE DLC program for The Witcher 3: Wild Hunt consists of 16 entirely free DLCs, that will be available for every gamer owning a copy of Wild Hunt, for Xbox One, the all-in-one games and entertainment system from Microsoft, PC, and PlayStation®4, and is applicable to all versions (digital or physical, standard or Collector’s).On February 25th, CD PROJEKT RED will release the first bundle of DLCs (2 of the planned 16) — the Temerian Armor Set (horse armor included) and a Beard and Hairstyle Set for Geralt, the game’s protagonist. After this date, a DLC bundle consisting of two DLCs will be published every week, entirely for free. Gamers are entitled to the free DLC regardless of obtaining the game via pre-order or after launch. Instructions on how to obtain DLCs on specific platforms will be provided at a later date. For additional details about the 16 FREE DLC program, please refer to the below Q&A.
Q: What do I have to do to receive the 16 free DLCs?A: The only thing you need to do to receive the 16 DLCs is purchase The Witcher 3: Wild Hunt. All of the DLCs will be available for free on every platform (i.e. Xbox One, PC, and PlayStation 4).
Q: Do I have to pre-order to get the free DLCs?A: No, each piece of content will be available for download regardless of you buying the game before or after launch on February 24th, 2015.
Q: I have the standard version of the game (i.e. not the Collector’s Edition). Do I still get the free DLCs?A: Yes. You get the 16 DLCs regardless of the version of the game you bought (i.e. standard or Collector’s, digital or physical).
Q: What’s the plan? When can I expect the DLCs to be released?A: The plan is to release a new DLC bundle (each bundle contains two DLCs) on a weekly basis, following the game’s launch February 24th, 2015. The first DLC bundle will be released the next day on February 25th. The next bundle will be available for download a week after that, on March 4th, the next on March 11th, and so on. The first bundle will contain theTemerian Armor Set and a Beard and Hairstyle Set for Geralt. The second bundle will contain an additional quest and an alternative look for one of the game’s main characters — Yennefer of Vengerberg.
Q: Where can I find out more?A: You can find more details on www.thewitcher.com. At this moment, four DLCs (two bundles) are revealed. The remaining DLCs will be unveiled each week after launch.