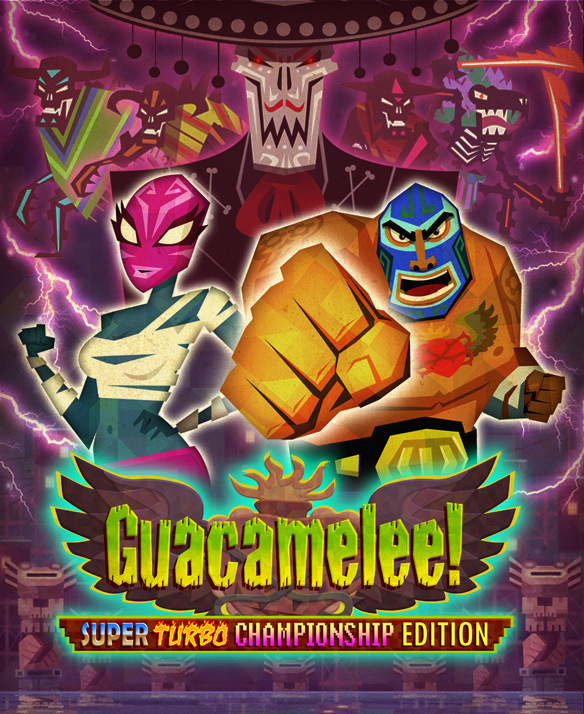 In an unprecedented move that will surely rock the ages, DrinkBox Studios announces it will bring the award-winning Guacamelee! Super Turbo Championship Edition (STCE) to Steam – with all its new content, including an extended story with new game areas, a new boss character, powerful new player abilities and many other enhancements.

Current owners of the original Steam version of Guacamelee! will enjoy a Steam loyalty discount of 66% off the base price of $14.99, while all other Steam users can enjoy a time-limited 10% launch discount.

This version of Guacamelee! STCE will include Steam workshop integration, including a Costume shop, Steam trading cards and plans for future updates.

• Available for purchase on August 21st 2014 from Steam
• Steam Workshop: Costume shop, Steam trading cards, plus some cool future updates…
• Owners of Guacamelee! Gold Edition (Steam) can purchase the game for $4.99
• New players can get Guacamelee! STCE for $14.99, with a temporary launch discount of 10% off during the first week on the store

New Features for the Guacamelee! Super Turbo Championship Edition Include:

• Expanded Story: An expanded version of the game that includes DLC content from the original
• New Game Areas: Players will ride boats through the Canal of Flowers to save a besieged fishing town, and avoid lava as they climb through the fiery Volcano
• New Boss: Face off against The Trio of Death, a three-headed skeleton that lives in the Volcano, helping the evil Carlos Calaca build his skeleton armies
• New Abilities: Maximize destruction with the powerful new INTENSO combat mode. Plus: Chicken Bombs and Independent Dimension Swapping
• New Enemies: Lethal new elite-class enemies that want to chokeslam luchadores to sleep
• Support for multiple save slots
• Dual currency system that supports permanent item unlocks

A trailer showing off some of Guacamelee! Super Turbo Championship Edition’s features is right here!

“My client pleads GUILTY to releasing STCE on Steam later than other platforms” said @drinkboxlawyer, totally fake ghost lawyer of DrinkBox Studios. “Thus, the courts have allowed the game to be launched on August 21st, but with the stipulation that all users who own Guacamelee! Gold Edition receive a generous loyalty discount.”