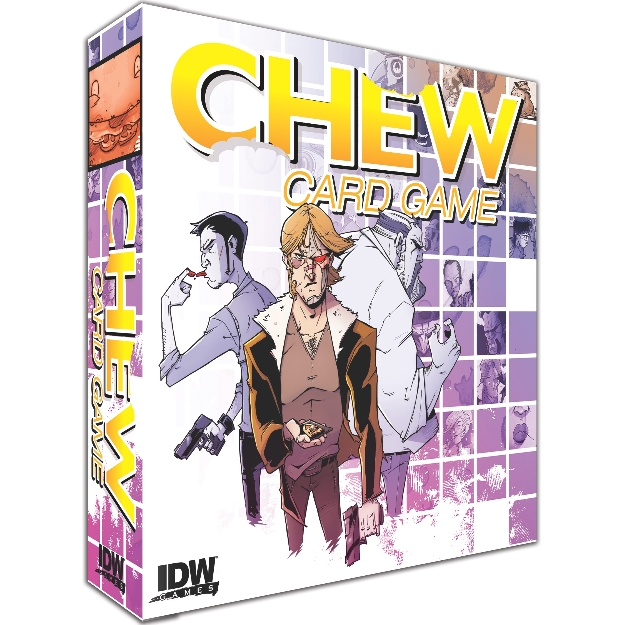 IDW Games announced a deal with John Layman and Rob Guillory that will create a new line of CHEW tabletop games for fans to sink their teeth into. The smash-hit comic series is already on its way to an animated adaptation, and starting in early 2015 fans hungry for more CHEW will have yet another way to devour their favorite title.

“I love working with IDW. I love the people there, and am always in awe of their commitment to quality,” says CHEW creator John Layman. “We’re gonna do everything we can to make the CHEW game every bit as awesome as the rest of IDW’s stuff. I’m excited and grateful for this opportunity, and Rob [Guillory] and I are going to be deeply involved in this thing– every step of the way!”

The CHEW game line will feature a smorgasbord of play options from board to card to dice games, each title being a stand-alone experience designed to whet fans’ appetites, whether they be a gaming novice or a connoisseur. IDW Games will be tapping top game designing talent to develop each game in the series, and Layman and Guillory will stay involved on the creative side to ensure the look and feel of each game is in line with the highly stylized, quirky world they’ve created.

“IDW has always loved working with John Layman and Rob Guillory,” says IDW’s Director of Business Development Jerry Bennington. “CHEW has grown into an amazing project, and we’re excited to bring it to the fans in a brand-new way. We’re looking forward to putting Tony Chu in all kinds of bad positions, and letting fans step in to save the day.”