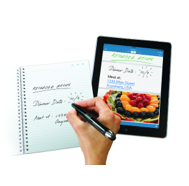 Livescribe Inc. today announced a new way to automatically save and share handwritten notes and drawings directly to Evernote, making it easier to capture everything from a meeting or lecture, then access that information on almost any computer or mobile device. This new feature is available to all Livescribe 3 smartpen customers with a free update to the Livescribe+ app for iOS. Once in Evernote, people can integrate handwritten paper notes with the rest of the information they keep in the online service, while also storing content in the Livescribe+ app.

“Pen and paper remains the most popular and natural way to take notes, and our aim is to integrate this traditional method with the modern digital tools that people use every day,” said Gilles Bouchard, CEO of Livescribe. “Now Livescribe 3 customers can send all their notes to their Evernote account without having to think about it.”

Through this new integration, customers can send exactly what they want – including individual snippets, a selection of pages, pencasts or entire notebooks – to specific Evernote notebooks. In addition, using the new Auto-Send feature, Livescribe 3 customers can designate any notebook in Livescribe+ to automatically update in Evernote any time notes or pages are written in that notebook.

To configure a notebook to Auto-Send, customers simply tap the Share icon while viewing any page of the Livescribe notebook they want to save to Evernote. From the Share panel, customers will see “Auto-Send” listed and upon tapping that, will see Evernote. Once Auto-Send is set up, Livescribe+ will create a corresponding copy of the notebook in Evernote that shares the same name. All the content from the notebook will be sent to Evernote and any new notes from that notebook will automatically be sent to the corresponding Evernote notebook when connected to the Internet. The integration is intelligent enough to even detect handwriting added or deleted on a specific page, and update Evernote accordingly. It will also keep updating a page even after it has been moved or edited within Evernote. Recorded audio pencasts can be manually sent to Evernote as needed.

Livescribe continues to make customer’s notes more useful by adding support for the services people rely upon every day. Developers can add native handwriting and audio recording support to their third party apps using the Livescribe 3 SDK. Interested companies can contact Livescribe at for more information.