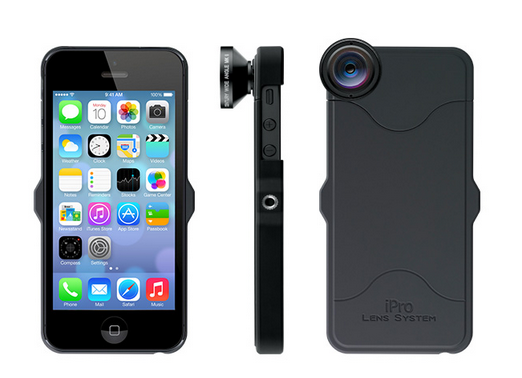 While location scouting, Kinsey uses his iPhone to upload high-quality photographs taken with the iPro Lens System. This allows him to decide which locations he will ultimately capture footage from with his larger camera rig. “As any DP, editor or professional photographer knows, your glass is the key to high-end photos,” Kinsey notes. “I put the Wide Angle lens on and set up the scene very quickly. So for me to have high-end glass to throw on an iPhone that has an incredible camera inside of it, the first thing I thought was, ‘How ingenious!’”

Kensey’s iPro Trio Kit includes three of the five add-on lenses available from Schneider Optics. The 2X Tele, Super Wide or Macro lenses mount to the special iPro iPhone case adding superior depth, width and detail to still shots as well as videos. (A Wide lens and a Fisheye lens are also additionally available.) iPro Kits include a case for the user’s iPhone 5, 5S or Samsung Galaxy S4 as well as the the iPro Handle.

The multi-functional iPro handle mounts to the case and securely stores the extra lenses while not in use. “It just screws right onto the rugged case,” he says. “It definitely helps balance it out; you get a steady move when you’re in motion, or if you want to get video. How fun is that?” The handle can be mounted to a standard tripod, or can serve as a stand by unscrewing the bottom piece and placing it on a flat surface. “The handle is an incredible feature, and I love it,” he adds.

Kinsey and Skull Bound TV Host Jana Waller are constantly on the go with the show. “I have 13 shows and one host. I shoot, edit and deliver,” he explains. “We do our own sales and social media; we hunt, fish, travel the world, explore and bring in interesting character footage. We have 96,000 Facebook fans right now, so we’re always out taking pictures, and sending Instagrams, Tweets and Facebook postings.”

The easy-to-use iPro Lens System helps Jim Kinsey work more efficiently in the field. “I’ve got to have something mobile and quick that I can pull out of my pocket and be able to quickly take photos in a moment’s notice,” he says. He continues to formulate new ideas for how it can help him create his vision. “The rest is left up to creativity and how I want to tell the story with this lens kit,” he adds.