Video Games Live returns with a new show during E3 2014 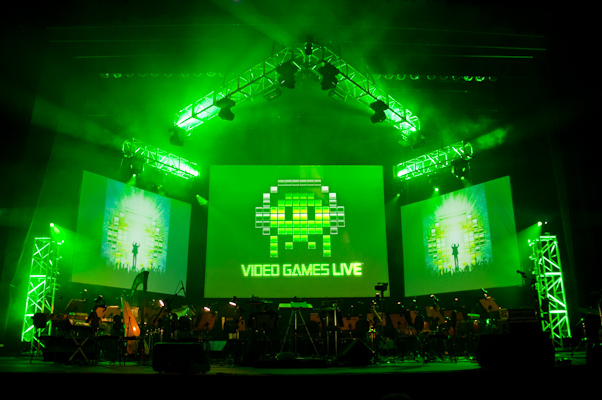 Heralded by the LA Times as “Ingenious and fantastic!” and proclaimed “Captivating and bombastic!” by the NY Times, Video Games Live has once again teamed up with E3 (Electronic Entertainment Exposition) to continue its 10 year tradition of pulling out all the stops for its annual Los Angeles show by announcing a cavalcade of special guests, first time ever music premieres, industry stars, and incredible prizes. The performance will take place on Wednesday, June 11th at the Nokia Theatre positioned directly across the street from E3, the game industry’s most important annual event.

“We typically like to keep our setlist a secret” says prolific game composer and Video Games Live creator/executive producer Tommy Tallarico, “but there are so many incredible performances, spectacular performers and industry special guests that I decided this time around to publish almost the entire setlist to the public as nothing like this has ever been attempted for a video game concert anywhere in the world! Since starting Video Games Live over 13 years ago, this particular show is definitely going to be one of our biggest and most exciting shows ever. Being partnered with E3 allows us to bring the entire industry together for a complete celebration of the gaming universe.” A complete listing of ALL the incredible World Premieres and Special Guests can be found here: http://www.videogameslive.com/index.php?s=e32014

A variety of YouTube and internet superstars will also be performing including Malukah known for her popular acoustic rendition of “Dragonborn Comes” which has been viewed over 40 million times around the world. Amazing vocalists Peter Hollens and Jillian Aversa (Halo, God of War) will be performing throughout the show as well as Mystery Guitar Man and Taylor Davis (Violin Tay). The video game cover band Critical Hit fronted by Blizzard Entertainment composer Jason Hayes along with Paul McCartney guitarist Laurence Juber will be premiering an incredible Mega Man arrangement as well as the world premier of Hearthstone: Heroes of Warcraft. World famous film score pianist Randy Kerber (Star Wars, Titanic, Forrest Gump) will be featured in the League of Legends world premiere.

During the show, the world’s leading record label dedicated to releasing video game soundtracks, Sumthing.com is giving away a year of free music downloads to three lucky winners. Sumthing’s catalog (over 250 albums!) features some of the most popular soundtracks of all time such as HALO, Castlevania, Deus Ex, Fable, Hitman, Journey, Mass Effect, Metal Gear, Silent Hill, Tomb Raider, Uncharted and many more! Prize will be awarded on stage during the show to lucky winners (any ticket holder will be able to enter).

The ever popular pre-show costume contest will be in full effect right before the show starts as each costumed member will be brought on stage as the audience decides the winner by volume of applause.

A complete listing of the Video Games Live World Tour can be found here:
http://videogameslive.com/index.php?s=dates